Recently I was reading comments on the Paralegal Society’s Social Club on LinkedIn about whether or not to wear “hose.”  Is it required for a truly professional look? When can they be left off? You can hear the angst in their keystrokes, as it slaps you in the face. Women are never sure if they are professional enough, polished enough, and let’s face it, sexless enough to be taken seriously. The hose thing, for example. I acknowledge I’m in California, so that may color the debate somewhat. But I look at it as a cross between what was customary for decades, and the current style trend that says “hose is for old-ladies,” coming to a head. 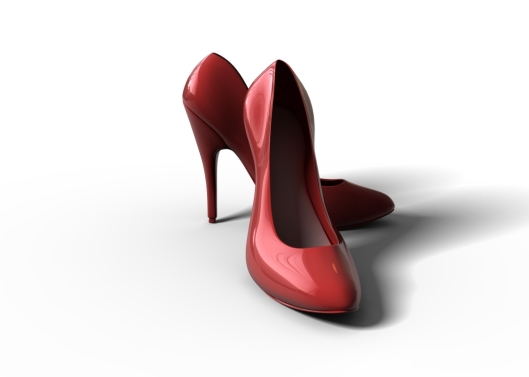 For years we were taught to cover our legs with stockings. Probably the day the corsets came off and the skirts went up. Only “hussies” would think of going without. So we dutifully slapped on our sweaty nylons, and braved the hottest days of summer, and we did it for decades. Frankly, I don’t feel an absence of hosiery looks sloppy if the shoes fit properly and the legs don’t glow in the dark, because the look is almost identical. If it isn’t glaringly obvious, it doesn’t distract, and therefore, doesn’t matter.

The art of dressing for one’s environment is extremely complex, isn’t it? Having been a professional costumer for over 20 years in a secondary career, I have studied the signals of dress extensively throughout history and across countries. Determining whether a particular character could afford a belt, would carry a purse (or a reticule: Ladies, anybody still rock one of those?), how their hair would be worn to denote social strata, even what fabrics would be correct for a servant as opposed to a merchant class female. All these things can come into play. It’s not that much different now. What we wear says to the world much about who we are. It is the first thing we say to a stranger. And we say it without words.

For women, dressing for the workplace has always been a little more complicated. Guys can do a suit. Simple, easy. But a woman who wants to look professional? She needs to run across a mine-field of options, opinions, rules and social stigma that can have her cowering in her closet before she even grabs her first cup of coffee in the morning, and she isn’t sure whether or not she can wear her combat boots while doing so.

Female legal professionals almost universally are currently “told” to wear suits, or dresses and jackets, closed-toed shoes and stockings. Whether it is conveyed expressly by their employers, or absorbed by example, this is the accepted “uniform.” But does it have to be? When a young woman I know first graduated law school, she had to shop endlessly to find clothing that fit her properly and was sufficiently reserved for her new job in Big Law. She’s large breasted and extremely petite in physique. A perfectly sedate blouse or knit top on most others would be considered too “sexy” for her to wear, so she always second guessed available options. She’s a bit fashion-obsessed, so to dumb down her look ran against the grain of her own personal style. Ultimately she chose to dress professionally, while attempting to express something of her own flair, which was usually to rock a pair of high heels (she is petite in stature as well, at 5’3″ ish), and never wore stockings. It was a tough line to walk, but she managed to find a few standout pieces that said something fashionable while maintaining the expected cut and shape of more traditional options, e.g. an adorable Hugo Boss tweed peplum suit jacket. That little bit of personal style injected into the drab trappings of her job, made her ever so happy.  Battle won.

These days, though no longer practicing law, she’s fighting another battle: how to negotiate the more relaxed atmosphere of business casual, and still be considered a professional in her current job.  Now in a large start up, the environment has changed. The expected dress code is fairly casual, and she dresses similarly. The only difference: she now feels free to wear an occasional knit shirt, which on her figure can be a bit more body conscious than on most. Even that small decision had some speed bumps. Recently she was pulled in briefly by HR, and told a co-worker (male) had commented on her look often being “too distracting.” She very calmly pointed out that she wore a lot more clothing than most of her female co-workers, and that if he was distracted perhaps it was his problem.

She went on to ask why women are always asked to subdue their sexuality, while her male co-workers were free to wear tight form-fitting jeans and whatever abs-revealing tee shirt they see fit. They are simply never called on the same carpet. It’s the echo of the old “she was asking for it” mantra that resonates, albeit subtly, in this scenario, that rankles her to her core. To be clear, this was a case of her natural endowments merely being more noticeable than those of her female co-workers in essentially the same clothes. By no stretch of the imagination had her attire crossed the “way too sexy” equator.

The important point, at least to me, is that women should be striving to appear professional, but not necessarily through means of an absolute male standard. One can find ways to comply with a norm that is acceptable and professional and serious enough, without waltzing into court in the same navy suit and nun shoes that might have been worn because it was expected of the women making the first steps toward equality back in 1962. It doesn’t have to be a uniform. The goal is to look polished, not to look like a dude. Unless, of course, dressing like a dude gives you a happy heart, and then, by all means, rock the man duds! To be professional, we need only dress like we gave a damn when we got dressed in the morning, not subvert who we are as women.  The finished product is up to us ladies, and if we choose to express ourselves with a little extra piping on a peplum, or a pair of heels just over 4″, so that our hearts are a little bit happier while we rock that Motion for Summary Judgment or calm a nervous client outside the courtroom, then that’s exactly how we should dress.

Women who are happy with how they look head to toe, will do a better job than those who feel oppressed by the dress code on her back. If you can feel your clothes pushing back at you, you will be far too self-conscious to make a good impression outward. And yes, if you are a little too creative, there may be a tiny bit of societal backlash, but I’ve always believed if one is assertive and confident, without being pushy or arrogant, one can carry the look.

Take the rules. Bend them a little until they fit you, without cutting off any of your toes like Cinderella’s poor unfortunate, step-sisters. Find your own version of costume truth. Then go out and conquer the world.

Angela has extensive experience in litigation support and law firm administration. Enthusiastic about workers’ rights and social responsibility, any firm she is to be part of must have the same philosophies. She has worked in the legal field for over thirty years, beginning her career as a legal secretary in a small boutique firm in downtown Oakland. Assigned paralegal work before the term was even coined, Angela rapidly learned to love the judicial system, eventually becoming both an office manager and a certified paralegal. After several years in probate and family law, she began working with her husband, Arthur Lazear, in the field of labor law. When the firm reached a landmark victory against Continental Can Company, exposing a pension fraud scam, Angela was tasked to serve as the administrative contact for the class. This experience provided her with what remains perhaps her favorite career moment: her first experience helping to effect a hands-on enactment of justice.

Angela continues to find the law rewarding, relishing the personal connection with clients in need of a voice to redress their grievances. Helping to improve the lives of others is what drives her, and at Lazear Mack, she knows she is part of a team that will do whatever it takes to ensure that each client receives the personal attention that is the firm’s signature.

Ms. Lazear is a third-generation Oakland native, whose family has long-standing ties with judicial history. As a result of her grandfather’s close relationship with Supreme Court Chief Justice Earl Warren, she was exposed early in life to colorful stories of justice, politics, and governance. A devoted patron of the arts, Ms. Lazear is a past-President of the Board of Directors for Alameda Civic Light Opera. Ms. Lazear is also an award-winning theatrical costume designer, having worked with various Regional Theaters in the Bay Area, and is the author of the popular online food magazine East Bay Food Scene.

We think Angela nailed it. She signed it, sealed it, delivered it, then threw a chocolate bar at it. (Okay, we may be lying about that last part, but it was a darn good, comprehensive fashion article, if we do say so ourselves. And we do. We hope she’s taking a bow right now.)

While we’re at it, we’d love to hear your personal thoughts regarding that ever present fashion minefield we each navigate each day in our own way. Got an opinion? Feel free to hit that comment button and tell us all about it.

We’ll see you next time.

3 thoughts on ““Dressing for Success in a Fashion Minefield””